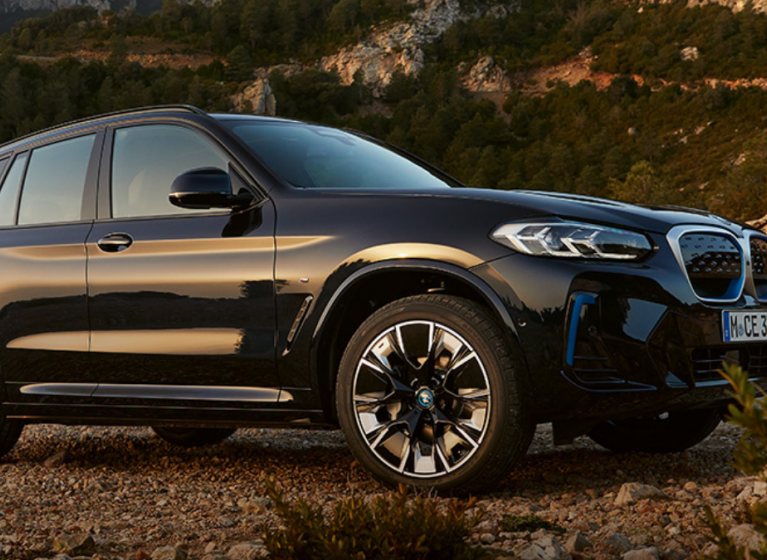 Along with the logical concept, the relationship with X3 can already be seen in the choice of name, as it starts with an i first name, the novelty of iX3. In addition, with the arrival of the iX3, the Bavarian premium manufacturer offers its customers "freedom of choice", as the BMW X3 is now the group's first model to be ordered with a petrol engine, diesel engine, plug-in hybrid powertrain technology and purely electric propulsion.

Manufacturers typically start on two paths when they start manufacturing an electric car. One is to build a completely new platform and the other is to build electric propulsion under existing technology. The former is considered more efficient by the profession, but based on practical tests, the second solution may be at least as good a way. Not only the iX3, but also some Hyundai, Mercedes-Benz or Peugeot models are good examples of this.

Although the iX3 is a new model, the eDrive powertrain technology in it is already in its fifth generation. The BMW iX3's perfectly integrated powertrain technology plays an important role in increasing efficiency and performance. The control electronics for the electric motor, transmission and driveline are housed in a single common housing. The electric motor, according to the principle of a synchronous motor, works without the use of magnets, which allows the resource to be mass-produced without rare earths. The iX3's electrical system's energy consumption and output is 30 percent higher than the solution used in BMW's currently available, purely electric models. The efficiency of an electric motor can reach 93%, while the maximum efficiency of conventional internal combustion engines remains below 40%.

The maximum power of the powertrain technology is 286 horsepower and, unlike most electric motors today, it can deliver 400 Nm of peak torque even in the highest speed range. The first BMW iX3 accelerates from a standstill to 100 km / h in 6.8 seconds, the territory of the BMW X3 xDrive30i, already equipped with an internal combustion engine. The top speed of the model is controlled by the control electronics of the powertrain technology at 180 km / h. The rear-wheel drive promises the classic driving experience of BMW models, with maximum traction and outstanding efficiency thanks to the drive-dependent traction control (ARB technology).

The BMW iX3's high-voltage battery combines 188 battery cells, with a gross capacity of 80 kWh - of which the system utilizes 74 kilowatt hours - and 460 kilometers with a single charge of the battery thanks to powertrain technology that works along outstanding efficiency. Only in urban or suburban use, we managed to drive 500 km out of the iX3, of course on the highway, driving at high speeds for half of that, the car can cover about 300 km. It has great fuel consumption and requires much less energy than, say, an Audi e-tron or a Mercedes-Benz EQC model. For us, the best consumption value was 13.9 and the highest was 17.4 kWh.

The model can be powered by single-phase and three-phase charging, with a charging speed of up to 11 kW, the latter being very useful, as it allows a wide range of 100 km to be recovered in one hour. When connected to a fast charger, the high-voltage battery can draw electricity with a charging capacity of up to 150 kW, which means that the battery can be charged to 80 percent charge in no less than 34 minutes from a fully discharged state.

Plus, the iX3 uses a very special solution to power it back. The system does its job automatically, the driver has almost nothing to do, he only has to stop the car with a brake for the last few meters. The technology that controls the regeneration of the energy released during braking continuously analyzes the data of the navigation system and monitors the sensors of the driving support systems, the intensity of the energy regeneration, thus adjusting it according to the specifics of the given route and driving situation. For example, when arriving at an intersection, a speed-restricted road, or a traffic jam (it even detects a red light!), The technology uses maximum intensity energy feedback, and on an empty road, the glider function is activated as soon as the driver takes his foot off the accelerator. In the B position of the lever on the center console, the single-pedal driving characteristic of the i models is activated, which guarantees the most intensive energy feedback possible. But there is no need to use it, because by default the system does its job perfectly, it really lets the car roll if there is room for it, and it slows down very intensively in, say, downtown, when the traffic is heavy. You get so used to it that when you switch to another car, you forget to slow down for the first time, waiting for the car to do all this on its own.

The aerodynamic properties of the BMW iX3 are optimized by type-specific body features. The front bumper and kidney-shaped “grille pair” are almost completely enclosed, and the rear of the car has been designed by designers to reduce air resistance as much as possible. Brand new, innovative “aerodynamic wheels” also play an important role in optimizing the airflow around the vehicle. The airflow around the vehicle is also optimized by rear diffuser, chassis cover and active grille fins, giving the iX3 a drag coefficient of just 0.29 (Cd).

Its purely electric powertrain technology is marked by the blue color of the BMW i division in both the body and the passenger compartment. In addition, behind the doors, a clean layout, first-class use of materials and a number of uniquely designed surfaces enhance the premium atmosphere. The unparalleled versatility can be achieved in the same space as the BMW X3 with internal combustion. By lowering the 40:20:40 split rear seat backrest, the standard 510-liter boot volume can be easily expanded to 1,560 liters.

Overall, the iX3 is a fantastically good SUV, retaining the compact dimensions of the X3, but built an electrical system that doesn’t require a big compromise, even with longer-term use. Its purchase price is also at the usual level in the premium segment, it is worth thinking about buying the iX3 model for those who love luxury but want to see the world a little greener.

Do you want to lease a car?

Sign up and be always up to date with out offer!
Get the latest news and special offers for the rental of vehicles and services!

Fill out the form and check the availability of selected offers.

The quote request is free of charge and does not oblige you to sign a contract.
The offer should reach you within 2 working days.

We are proud to announce that on 1 July 2021 our company is changing its name to MHC Mobility.

This change is not going to affect any current contracts, business decisions or the scope of our services. Our goal remains to provide top-class mobility solutions and support for our Customers’ business development.

Go to the website
We have to collect some data when you use this website so it works and is secure. We'd also like your consent to collect data to study how people use our site. This will help us improve our service and tailor the marketing you see on the apps and other websites. Select “Close” to agree or 'Show more' to know better about the cookies. You can change your mind by changing the browser settings. Show more. Accept